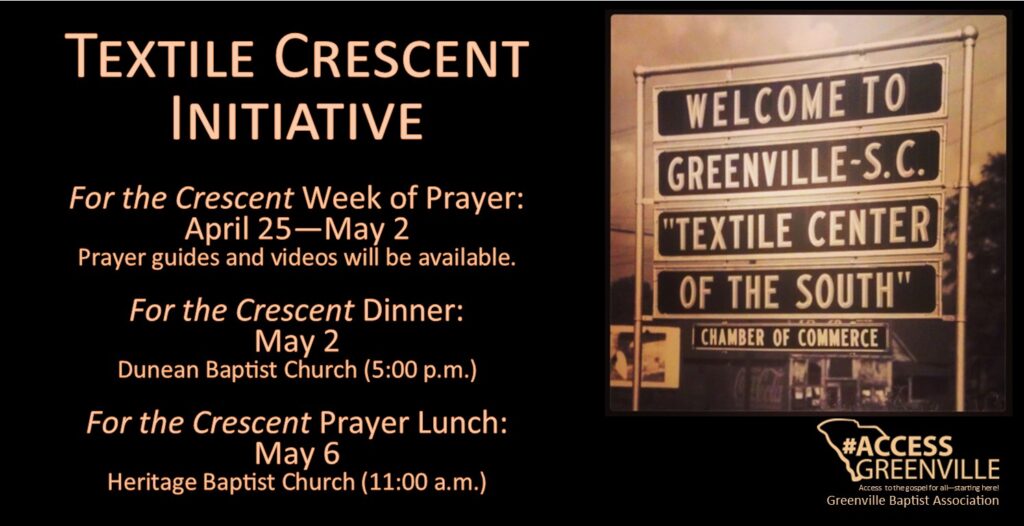 Join us for this season of prayer for all the mill villages and churches.  What might God do when all the churches of the GBA join to pray for revival in our mill villages?  Lead your church to pray for the Textile Crescent.  Prayer guides and videos will be available.

Pastors, staff, and all members of the churches in the Textile Crescent are invited to join to worship and discover next steps in bringing new life to your church.  Discover…

The GBA Executive Committee will meet at 11:00 at Heritage Baptist Church in the old Monaghan Mill Village, followed by lunch and prayer in Textile Heritage Park across the street from the church.  We will eat a picnic lunch and walk the Textile Heritage Trail, praying over our mill villages and churches.

What is the Textile Crescent?

The Textile Crescent stretches from north of Greenville around the west and to the south of the city.  There were once 19 cotton mills in and around Greenville.  Each was a tribe unto itself complete with housing, stores, currency, sports leagues, and churches, all provided by the mills for their workers.  The first mills were built in the late 19th century with a second wave that were added in the early part of the 20th century.  At its height, the textile mills employed one out of every three people living in the county.  By the 1960’s, the textile industry faced growing competition from overseas with much cheaper labor.  One by one, the mills began to cut back and close.  The communities went through dramatic transformation as the mills closed.

What happened to the textile mill churches?

The children of the workers moved out of the communities.  As the older people who had worked in the mills began to die, the houses became rental properties.  The tidy mill hills deteriorated, and the mill villages became very diverse socio-economically and racially.  Unfortunately, the churches did not adjust and lost touch with their neighborhoods.  The members drove to church on Sunday but rarely lived in the neighborhood.  As the churches aged, they shrank in size and the buildings began to deteriorate as money became tight.  Churches that were once full and healthy and the very center of the neighborhood became isolated and empty and lost sight of their mission.  They were already in poor health when the mill hills began to go through a new transformation – gentrification.

What is gentrification and what challenges does it pose?

In the last decade, the gentrification process has crept outward from the city center into the former mill hills. The city has become a magnet for the younger upwardly mobile or empty nesters nearing retirement.  The new people coming to the city drove up the demand for housing and services in the city center.  Older houses were scooped up by developers and builders.  They were flipped or torn down and replaced with new houses.  As demand grew, it outstripped the supply in the city and the former mill hills became attractive targets for investors.  In many cases, the abandoned mills themselves are being renovated and turned into condominiums.  The mill houses are now being flipped and prices are going up.  The property values are driving up taxes and insurance costs, pushing the poor out.

What is the challenge textile mill churches face in creating access to the gospel?

The new transition catches the churches unprepared for the new opportunity.  The new people who are moving in are often younger and more affluent and more educated than the people in the churches.  The church buildings, often in disrepair, do not appeal to the new neighbors.  The worship services and programs of the churches are designed to appeal to the older, traditional members.  There is a wide gap between the churches and the new neighbors in virtually every way.  The churches have drifted from the vision and mission of the church to make disciples of Jesus.  They may be resistant to the changes needed to become more relevant to the people they are supposed to reach.  They are discouraged and fearful and do not know what to do.  Most of the churches are a couple of funerals away from not being able to meet their obligations.

What is the opportunity for creating access to the gospel in the textile mill villages?

The opportunity is great. 220,000 people are moving to Greenville in the next twenty years.  The city is still one of the hottest real estate markets in the state.  The mill villages are one of the last and most affordable sources of undeveloped housing in proximity to the city center.  They are in the early stages of gentrification.  If the churches can adjust, they can be ready to reap the benefits of the changes in their communities over the next ten years.  The window of opportunity is short and will require significant effort on the part of the churches.

What is GBA doing to help create access to the gospel in the Textile Crescent?

To maximize the opportunity to create access to the gospel in the former mill villages, the GBA is launching the Textile Crescent Initiative in 2021.  The TCI will offer significant investment in the mill village churches with training, equipping, partnership opportunities, revisioning, leadership development and financial commitments.  The goal is to realign the existing churches with their communities so that the people living there can have access to the gospel in a way they understand.  We want to help these churches become the beating heart of their villages once again.